Esther*, attended Our Time’s KidsTime Workshops from the ages of 13 to 17. Her mother has a bipolar illness.

“The KidsTime Workshop was the first time anyone described my mum’s illness clearly to me. I realised why she was different and that I had nothing to be ashamed of. I also met other children with the same problems which made me feel we weren’t abnormal.

At home, I had to behave like an adult; we couldn’t run around or make a lot of noise and we had to always make sure Mum was okay. KidsTime was the one place I could be a child – I could play, have fun and laugh and I really needed that.

In my mid-teens I went through some bullying problems that led to rebellion. I stopped taking my education seriously and bunked off school. My English teacher talked to me and made me realise that I did care about being successful. I knuckled down and went to university, where I graduated in biomedical science before doing a master’s in psychological therapies. I now work in mental health.

Mum’s health is still up and down, but we are doing okay. Two things have got me to where I am: KidsTime Workshops and my teachers. With the right information and support, teachers have the power to make a difference to children like me.”

*The participant’s name has been changed to protect their identity

Rose*, 10, is a KidsTime Workshop participant. Her mother suffers from mental health difficulties.

“I do not think about my mum as having a mental illness but I know sometimes she can get very, very upset. I try to make her feel better but can’t always which makes me feel helpless and sad. I also try to help by looking after my brother and sister. I get so annoyed and

emotional with the people who make my mum upset but just hurt inside because I know I can’t do anything about it. At KidsTime Workshops, I realised that I’m not the only child with that sort of problem and that other kids felt the same. At KidsTime Workshops, I love talking about mental illness because it helps me understand more about what it is and how it can affect people, like my mum. I also enjoy playing the games because they are fun and I get to know more about people. Most of all I enjoy the drama because when I’m older I would love to be an actress.”

*The participant’s name has been changed to protect their identity 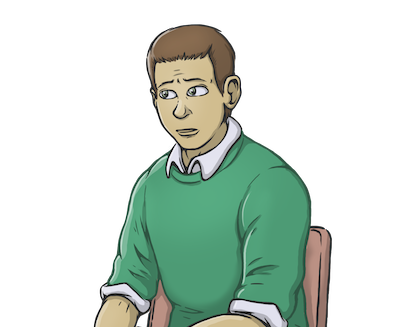 “For the past 10 years, my wife has had a heart and lung condition that has led to depression, self-harm and binge drinking. We have had suicide attempts and she has been sectioned. Drew has never known a home life without that turmoil. At the age of nine, Amy’s teachers reported that she was becoming withdrawn and falling behind at school. It’s hard for any kid to come out and say: ‘My mum or dad has gone off the rails,’ so instead Amy was pushing herself into a corner and could no longer relate to her peers. But coming to KidsTime Workshops has enabled her to see that others are in similar situations and, although we have problems, we are working through them. That has given her confidence and now she is blossoming.”

*The participants’ names have been changed to protect their identity