The team are finally coming back down to earth after a jam-packed day on Friday 11th October for Global’s Make Some Noise!

As one of their charities this year, we were invited to start the day by welcoming Jamie Theakston back after his epic bike ride across the UK. He arrived in a very wet Leicester Square to a big group of supporters including Our Time.

Following this, Our Time was invited to speak on the James O’Brien show in two separate slots.

First, Chineye and KidsTime Workshop Lead Conny spoke about the work the charity does and the impact it has had on young people’s lives. Chineye spoke from personal experience and both Conny and Chineye did the charity proud speaking eloquently and honestly about their experiences.

You can see Chineye’s chat below:

An hour later, James was joined by three young people – Ambeya, Aymen and Hania. Ambeya spoke about life as a young carer for her mother. Aymen and Hania spoke movingly about their experiences too and how the KidsTime Workshops have helped them. We could not be prouder of these three who were confident and assured.

You can see Ambeya’s speech below:

Well done to all our team members who took part. Global raised over £4 million for charities across the UK which is incredible. Huge thanks to the whole team for allowing us to be a small part of this fantastic day. 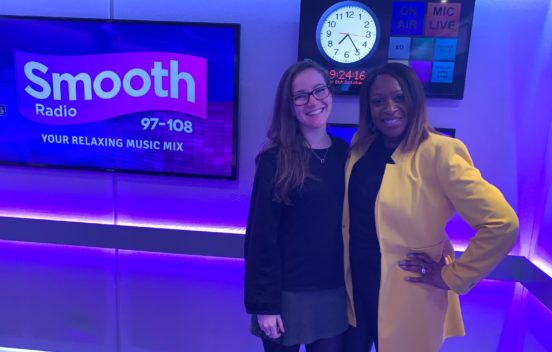 10th October 2019 Our Time's Kirsty speaks to Angie Greaves on Smooth Radio as part of Global's Make Some Noise.
View