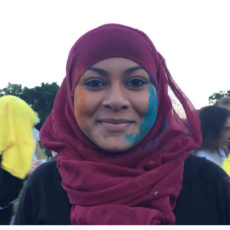 Ambeya is a young carer and ambassador for Our Time

Life is tough for parents with a mental illness – but it’s also tough for their children.

It is impossible to make this issue go away so I feel it’s my duty to raise awareness of it, so these children get the support they need to help them through. I want to do my bit and help these vulnerable children and young people protect themselves from the negative effects of living with, and sometimes caring for, a parent with mental illness.

I have met kids from the age of three who are caring for their parent. No child should be forced to become an adult from such a young age. These children don’t deserve to lose out on their childhood and parent their own parents. Just because you can’t see it like physical illnesses doesn’t mean it’s nonexistent.

These children have become isolated from a society where a mental illness is seen as a taboo or their caring responsibilities do not fit the attributes of a ‘normal kid.’ These children have to deal with the difficulties and heartaches on their own because they feel embarrassed to speak up – I take it as an obligation to be the voice that speaks for them.

When you feel like there is no one to turn to for help, these children can be left with no choice but to take over the parent role and keep everyone safe; sometimes tolerating verbal abuse and extreme and/or aggressive behaviour. This shouldn’t be allowed.

I believed it was my duty to remain strong and reliable for everyone in my life and that I couldn’t let them see the messed up person that goes into hiding.

For those who know me for my stubbornness, I would still like to believe I am superwoman. And this is why I want to prevent others from experiencing a tough childhood like me; creating the change that these young people are wishing will happen.

Life has been a rollercoaster for me, but over the years I have learnt how to manage sometimes life-threatening situations. Being a carer has now become part of who I am and I’ve been able to find ways to deal with it on a day-to-day basis.

If Our Time had been available when I was younger, life would have been so much easier for me. I wouldn’t have had to learn about my role as a carer or study mental illnesses through Google. I wouldn’t have had to try to manage everything when someone else could have taken that pressure off me. Maybe, I would have even learnt how to build up the courage to ask for and accept help – something which I still struggle to do.

Children who have a parent with a mental illness need the support and resources to better manage their roles at home, building resilience and confidence along the way in order to help them build a brighter future for themselves.

I know there are so many other kids out there who could be in the same situation as me. They avoid asking for help or even acknowledging that they care for someone. They are unable to confront their fears and it hurts to know they have to deal with it on their own, just like I had to do.

I always thought I was the only one but when I got involved with Our Time, I see so many children in the same boat. I would like to see all the kids in this situation learn that you can look after your own emotions as well as coping with mental illness, as a family.

Investing in young people’s physical and mental health shouldn’t just be a moral imperative, but will prevent problems occurring later in life which may need more intensive and expensive support.

I’ve never really had dreams before – but being a part of Our Time has allowed me to start dreaming. And I do dream that one day, the words ‘young carer,’ ‘mental illness,’ and other words which carry such stigma – are used as words to describe achievements, as positive challenges and something recognised for the right reasons. Because right now, it feels like we are so far away from achieving that.

I will be taking part in a sponsored trek across the Sahara Desert in the autumn for Our Time. I am taking on this once in a lifetime challenge to continue to raise support and awareness for these children and the work that Our Time does and I would love for you all to feel the passion and energy that I feel. In order to do this, I must raise a minimum of £2000. Any amount would be appreciated and your support will carry on driving my commitment!